Bangkok: April 26, 2017 – SCG announces Operating Results for Q1/2017, showing profit increase 29% y-o-y, thanks to the Chemicals business. ASEAN investments prominently prosper with the collaboration with partners in Vietnam towards the first petrochemicals complex that shall enhance competitiveness and efficiently support ASEAN business growth. Also, cement plants in Laos PDR and Myanmar began commercial operation, fulfilling the construction sector demand. SCG has recently invested in a cement plant and packaging business in central Vietnam and Indonesia respectively. This is in respond to the growing consumer goods market in Thailand and ASEAN which continues to propel demands for packaging.

Mr. Roongrote Rangsiyopash, President and CEO of SCG, disclosed the company’s unaudited Operating Results for Q1/2017, with registered Revenue from Sales grew by +6% y-o-y to register 77,512 Billion VND (US$ 3,311 Million). Profit for the Period reached 11,591 Billion VND (US$ 495 Million), an increase of 29% y-o-y, attributed mainly from the continuous good performance of the chemicals business and non-recurring gain from the sale of investment assets and non-used assets. In addition, export Revenue, which accounted for 27% of SCG’s total Revenue from Sales, y-o-y to 20,696 Billion VND (US$ 884 Million).

Mr. Roongrote mentions that “SCG’s investment in ASEAN is in line with the vision. Recently, SCG increased investments to 71% in the Long Son Petrochemicals project, the first integrated petrochemicals complex in Vietnam. The project is located in Ba Ria – Vung Tau province near Ho Chi Minh city, a location with promising economic growth. The project has incorporated state-of-the-art technology which possesses international standards for health, safety, and the environment in its operation. Its outcome will fulfill the rising domestic demand and expand across the ASEAN region. At present, SCG is in the final stage of financial investment decision with Vietnamese partner. The construction time is expected to be 5-year period with plans for commercial operations in 2022.” For the Cement-Building Materials business, SCG acquired the Vietnam Construction Materials JSC (“VCM”), an integrated cement operator in Vietnam, holding a production capacity of 3.1 million tons per year. The complex, located in the central Vietnam at Quang Binh province, will serve nearby market in the first phase with plan to later serve throughout the country. In this quarter, as the cement plant in Myanmar has begun commercial operations in January 2017, another cement plant in Laos PDR has also begun commercial operations in March, hence, offering SCG with a combined cement production capacity in ASEAN excluding Thailand of 10.5 million tons per year.” 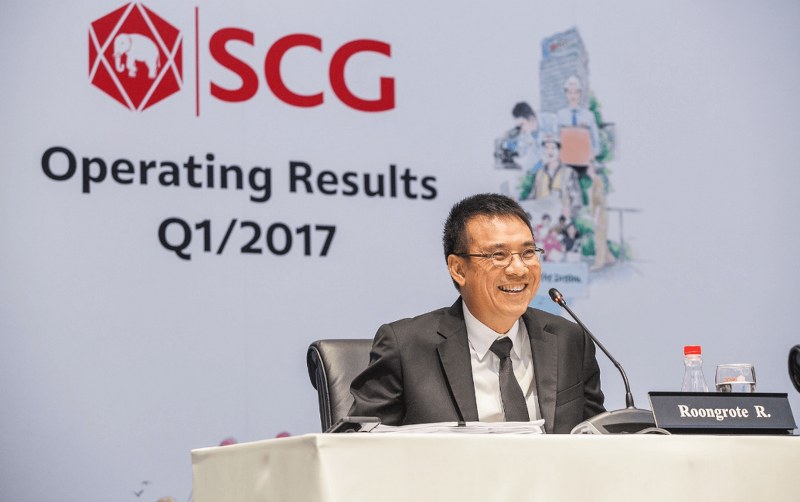 In addition, SCG also invested in Indocorr, Indonesia’s producer of high-quality corrugated containers with a capacity of 32,000 tons per year totaling to SCG’s combined packaging production capacity of 1,045,000 tons per year. Additionally, SCG constantly seeks opportunities for investments in both the paper and flexible packaging business to commit to serving the rapidly growing packaging demand in Thailand and ASEAN as well as the behavioral shift in consumers’ lifestyles who prefer to dine outside of homes.

SCG, one of the leading conglomerates in the ASEAN region, comprises three core businesses: SCG Cement-Building Materials, SCG Chemicals, and SCG Packaging. With more than 200 companies under its umbrella and approximately 54,000 employees, SCG creates and distributes innovative products and services that respond to the current and future needs of consumers.

SCG began its business operations in Vietnam since 1992 with trading business and gradually expanded investment in diversified businesses in the cement-building materials, chemicals, and packaging industries.

Today, with total of 23 companies across Vietnam driven by approximately 8,300 employees, SCG offers variety of premium products and services to markets. Available products in cement-building materials include, concrete roof, fiber cement board, fiber-cement wood substitute products for floor and ceiling, white cement, ready-mixed concrete under the brand ‘SCG’ and wall and floor ceramic tiles under the brand ‘COTTO & Prime’ and sanitary ware & fittings, bathroom fixtures under the brand ‘COTTO’. In the packaging business, available products are reading & writing paper under the brand ‘IDEA’ and corrugated containers, kraft paper and flexible packaging. In the chemicals business, available products are downstream chemicals products such as PE&PP, XLPE, PVC resin and compound, etc. Besides, SCG also has a building materials showroom in Hanoi to welcome customers to experience SCG products and services.